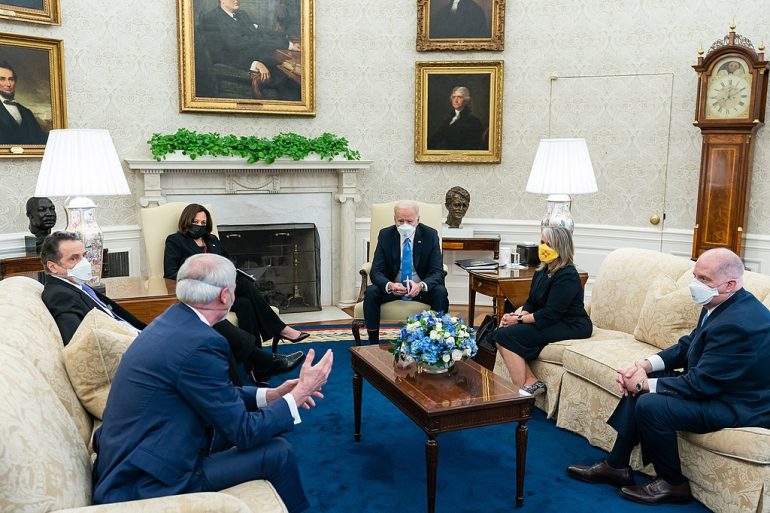 President Joe Biden and Vice President Kamala Harris meet with Governors and Mayors in the Oval Office of the White House Friday, Feb. 12, 2021, to discuss the American Rescue Plan. (Official White House Photo by Adam Schultz) This official White House photograph is being made available only for publication by news organizations and/or for personal use printing by the subject(s) of the photograph. The photograph may not be manipulated in any way and may not be used in commercial or political materials, advertisements, emails, products, promotions that in any way suggests approval or endorsement of the President, the First Family, or the White House. [Photo Credit: The White House, Public domain, via Wikimedia Commons]
Nick Landry·
NewsPolitics
·5 months ago··7 Comments·3

Kamala was her usual self, using word salads to try and answer questions she likely does not have any knowledge of.

Harris responded to a question from Todd about 2 million illegals entering the country this year by claiming that the border is “secure.”

Even Todd wasn’t buying it:

"We’re gonna have 2 million people cross this border for the first time ever." Chuck Todd doesn't appear to buy VP Harris' claim that the border is secure. pic.twitter.com/7K6Txsxc0Z

“We’re gonna have 2 million people cross this border for the first time ever. You’re confident this border is secure?” Todd challenged.

“We have a secure border in that that is a priority for any nation, including ours and our administration,” Harris continued, pivoting then to attempt to blame the present situation on former President Donald Trump. “But there are still a lot of problems that we are trying to fix. Given the deterioration that happened over the last four years.”

Harris concluded by once again calling for a “pathway for citizenship” and arguing that the only reason that had not yet been done was that the leadership in border states — which happens to be primarily Republican — was “playing politics” with people’s lives.

“We also have to put in place a law and a plan for a pathway for citizenship for the millions of people who are here and are prepared to do what is legally required to gain citizenship. We don’t have that in place because people are playing politics in a state like this [Texas] and in Congress — by the way, you want to talk about bipartisanship, on an issue that at one time was a bipartisan issue. Both in terms of Republican senators and even presidents.”

In response, Republican Governors in Texas and Arizona are bussing the illegal migrants to Democrat run cities who have declared themselves sanctuaries.

[READ NEXT: Trump Loses to Hillary]