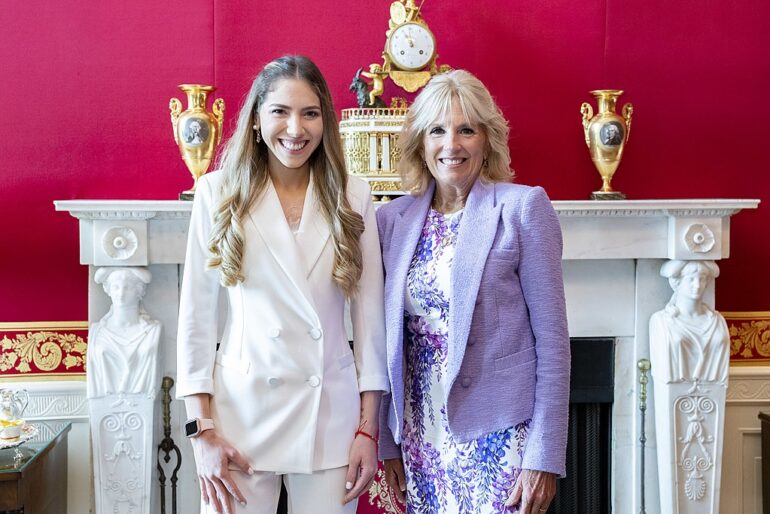 I was honored to welcome @FabiiRosales to the White House yesterday to hear her story as an advocate for vulnerable Venezuelans. She is a courageous First Lady and mother fighting for a better future for all Venezuelans. [Photo Credit: Office of the First Lady of the United States, Public domain, via Wikimedia Commons]
Nick Landry·
NewsPoliticsWorld
·7 months ago··3 Comments·0

Progressive Jill Biden thinks the hispanic community is as unique as tacos.

During the recent “LatinX IncluXion Luncheon” the First Lady made her inclusive statement, The Daily Caller reports.

Jill Biden just said Hispanics are as “unique” as tacos.

This isn’t Veep. Which White House speechwriter just won a bet for getting the First Lady to say something like this?pic.twitter.com/DXfJgYz0g5

Then the reactions came, including one from Texas Senator Ted Cruz:

The report went on:

The term “LatinX” has been a center of conflict among the Hispanic community as it aims to erase gendered language traditionally used in the Spanish language, as well as the Hispanic and Latino communities. Nearly a quarter of Hispanics said they preferred to be called “Hispanic” and 15% preferred the label “Latino” over “LatinX,” according to a Gallup poll. The majority, 57%, said they did not care.

Biden then was forced to issue an apology according to The Daily Wire.

After much backlash — including an official denouncement from the National Association of Hispanic Journalists (NAHJ), which pointedly told Biden, “We are not tacos” — the first lady issued an apology via Twitter.

“The First Lady apologizes that her words conveyed anything but pure admiration and love for the Latino community,” Michael LaRosa, press secretary to the first lady and special assistant to the president, tweeted.

Things appear to be going great for the Biden’s.