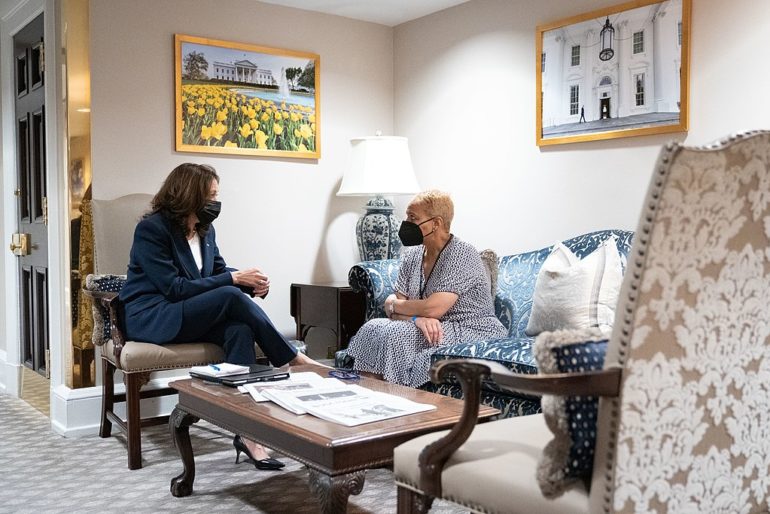 Vice President Kamala Harris chats with Tina Flournoy, Assistant to the President and Chief of Staff to the Vice President, in the West Wing of the White House, Wednesday, August 18, 2021. (Official White House Photo by Lawrence Jackson)
Nick Landry·
NewsPolitics
·9 months ago··1

The exodus of Kamala Harris’s staff continues as her current Chief of Staff Tina Flournoy prepares to exit the White House.

It is reported that Flournoy will be replaced by Lorraine Voles a veteran Democrat operative.

Flournoy has led the vice president’s operation since the start of the administration, overseeing all staff and setting the strategic direction for a historic and high-profile vice president. That makes her the highest-ranking of a sizable group of top officials who have left Harris’s office recently, including her deputy chief of staff, national security adviser and speechwriter.

Until Flournoy’s exit, the most visible departure from Harris was senior Harris adviser Symone Sanders, who left at the end of last year and shortly afterward inked a deal with MSNBC. Jamal Simmons, a longtime Democratic operative, joined Harris’s staff as communications director a short time later as part of a comprehensive overhaul of the communications team.

Harris has had career-long questions about her management style and what it is like to work for her. The departure of Flournoy brings that back into the forefront for a Vice President who has struggled to find her footing and isn’t even in the conversation to replace the mentally struggling Biden.

Harris’s staff has said the departure is routine, but it is another blow for Harris who couldn’t even make it out of Iowa in her run for the White House.