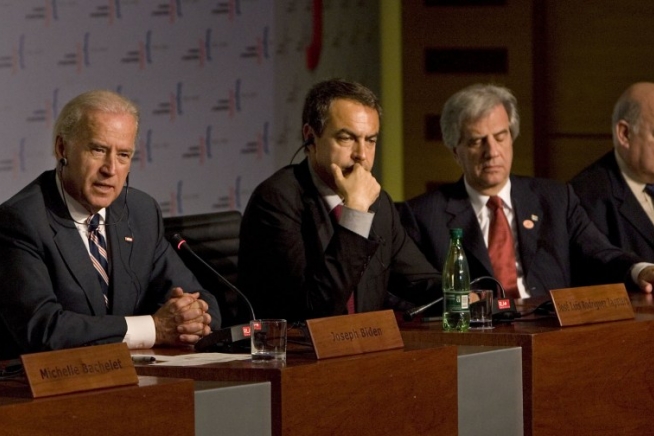 .Originally appeared on the Daily Signal.

After a hot summer with utility bills rising, reasonable people would think that President Joe Biden would want to keep air conditioning costs low for Americans.

But the Senate is poised to vote on a climate treaty that would raise those costs and put yet another notch in the belt of Biden’s whole-of-government, whole-of-the-economy climate agenda.

In his first week as president, Biden issued Executive Order 14008, “Tackling the Climate Crisis at Home and Abroad.” Among the many regulatory actions it initiated, Biden’s order also directed his administration to pursue the Senate’s ratification of the Kigali Amendment to the U.N. Montreal Protocol on Substances that Deplete the Ozone Layer.

What does a treaty on the ozone layer have to do with global warming? Very little, but it offers a convenient cover to slip in costly climate policy that would drive Americans’ air conditioning costs even higher.

The Kigali Amendment mandates a phasing down of hydrofluorocarbons—the most common and affordable compounds used in the U.S. and globally for air conditioning, refrigeration, building insulation, semiconductor manufacturing, and even fire extinguishers. Hydrofluorocarbons also emit greenhouse gases (more on that later) and consequently have become a target of global warming alarmists for elimination, regardless of the costs or  benefits of doing so.

Think just of where Americans use air conditioning— in houses, cars, businesses, offices, hospitals, and data centers—and the scope of the Kigali Amendment becomes clearer, to say nothing of the other uses of hydrofluorocarbons.

Ratification of the Kigali Amendment is an unmistakable item on the Biden administration’s climate “to do” list. But it adds up to trouble for Americans.

Here are six reasons why:

Doubling down: Congress passed legislation requiring the Environmental Protection Agency to develop regulations to reduce domestic production and use of hydrofluorocarbons. The law (the American Innovation and Manufacturing Act) was passed right before Christmas 2020 in a massive omnibus spending package and mirrors the Kigali Amendment requirements.

So, what is the harm in doubling down on the EPA’s regulations by ratifying Kigali? In doing so, the Senate would be ceding control to the U.N., turning oversight over to international bureaucrats, and removing flexibility to make adjustments in the future. Currently, Congress has little idea of the costs or impacts of this mandate besides theoretical guesstimates and what certain special interests have told them.

Those who push for ratification are stating a preference for oversight and ultimate implementation by the U.N. rather than Americans’ representatives in Congress.

Six years: The Constitution requires presidents to get the “advice and consent” of the Senate in order to ratify treaties. While President Barack Obama supported the Kigali Amendment in 2016 as part of his climate agenda, the Senate has declined to ratify it for these past six years. There is no rush or pressing need to ratify Kigali now.

146 nations: If the Senate ratifies the Kigali Amendment, the U.S. would be held to a more rapid timeframe to phase out hydrofluorocarbons and comply with the treaty. In contrast, 146 other nations, including China and Iran, have more lenient requirements and an extra decade to comply.

People and businesses in those countries will have access to more affordable refrigerants and other hydrofluorocarbons for a decade longer than American residents and businesses.

With the second-largest economy in the world, China is outgrowing its label as a developing nation and the favorable terms and flexibility afforded to it by the U.N.

$957,235,348: A multilateral fund was created by parties to the Montreal Protocol to subsidize compliance by developing countries and fund related research and development. American taxpayers have paid more into this fund in the past 30 years than any other country, to the tune of nearly $1 billion. By ratifying the Kigali Amendment, American taxpayers will be subsidizing other countries’ compliance with the mandates in addition to the costs that will come with meeting the mandates themselves.

Fourfold: The Kigali Amendment mandates a rapid decrease in the consumption and production of the most widely used, affordable means of cooling.

Americans can expect repair and replacement costs for appliances, such as the air conditioners in their homes and cars, to increase. Ben Lieberman of the Competitive Enterprise Institute writes that “the price of the refrigerant used in home air conditioners shot up 4-fold, and as a result, certain repairs now cost hundreds [of dollars] more” since the EPA began implementing domestic regulations that took effect this year and mirror Kigali.

Ironically, Biden recently directed millions of dollars to subsidize air conditioning for low-income families in the midst of a July heat wave. In the years to come, those very same units are likely to only get more expensive and out of the financial reach of the people he was intending to help.

0.05 to 0.06 degrees Celsius by the year 2100: That’s the more realistic reduction in global temperatures Americans can expect, assuming countries fully comply with the Kigali Amendment. Many have claimed that eliminating hydrofluorocarbons is necessary to fight climate change and can reduce global temperatures by “as much as 0.5 degrees Celsius.”

However, that estimate makes the most generous assumptions about compliance, likely double counts alleged temperature reductions from other countries’ other climate pledges, and relies on the most extreme (and implausible) climate scenario, which even the U.N. Intergovernmental Panel on Climate Change considers of low likelihood.

In sum, the goals of the Kigali Amendment promise increase costs on American families and businesses, with invisible environmental benefits.

Rather than an easy environmental “win” for the Senate, ratifying the Kigali Amendment would create hotter, more expensive summers for Americans that will be very hard to undo.

Katie Tubb is a policy analyst for the Thomas A. Roe Institute for Economic Policy Studies at The Heritage Foundation. Read her research.