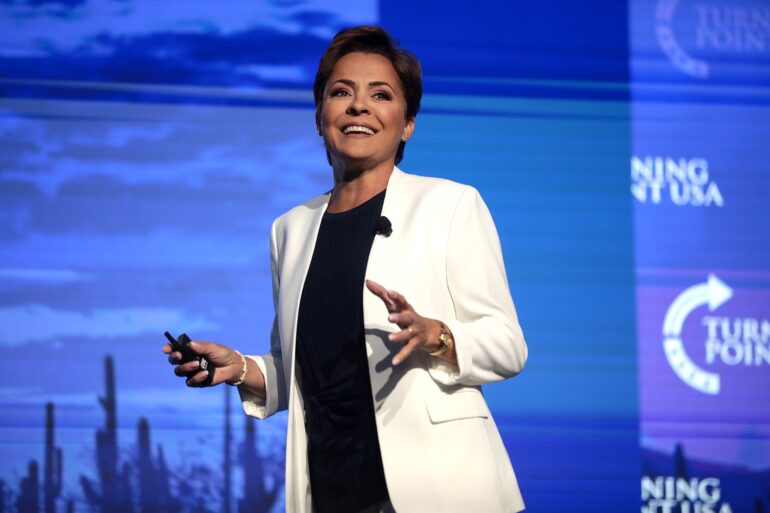 Kari Lake Calls for Election Official in Arizona to be ‘Imprisoned’

Republican Kari Lake, who lost the race for governor of Arizona, reportedly demanded on Sunday that Maricopa County election officials be “locked up” as she prepares to challenge her opponent’s declared victory in court proceedings this week.

In a lengthy speech to a group of young conservatives at Turning Point USA’s ‘America Fest,’ Lake repeated claims concerning the 2020 presidential election that so far have not been proven and the election of Katie Hobbs as governor last month.

After several different Election Day voting centers had printing issues, Maricopa County, Arizona’s most populous county, which includes Phoenix, has been the focal point for, as of yet unsubstantiated, charges of voter suppression.

Election authorities recognized the problems and stressed that voters in need of a backup plan may choose any of the available choices.

However, Lake and other Republicans have asserted that the problems practically amounted to voter disenfranchisement, pointing out that the state’s election day ballots favor Republicans.

On Sunday, Lake linked her struggle to that of the Founding Fathers who opposed British rule.

Lake cited Benjamin Franklin and other founding fathers before claiming that their blood is “coursing through our veins.”

Maricopa County and Hobbs, who was running for governor and serving as secretary of state, urged a state judge to deny Lake’s election challenge.

If the lawsuit proceeds, a two-day trial is slated for later this week after Monday’s oral arguments on the motion.

At the event on Sunday, Lake asked the audience to pray for the judge, saying she wasn’t sure how he would decide on the dismissal request.

The county election workers were referred to as “magicians” who made ballots appear randomly, according to Lake.

On Sunday Lake claimed that 300,000 ballots in Maricopa County were counted without the required chain of custody documents, as she has charged in court.

“This allegation is false, and will be easily disproven by the County if necessary,” Maricopa county stated in court filings in response to Lake’s unsubstantiated claims.