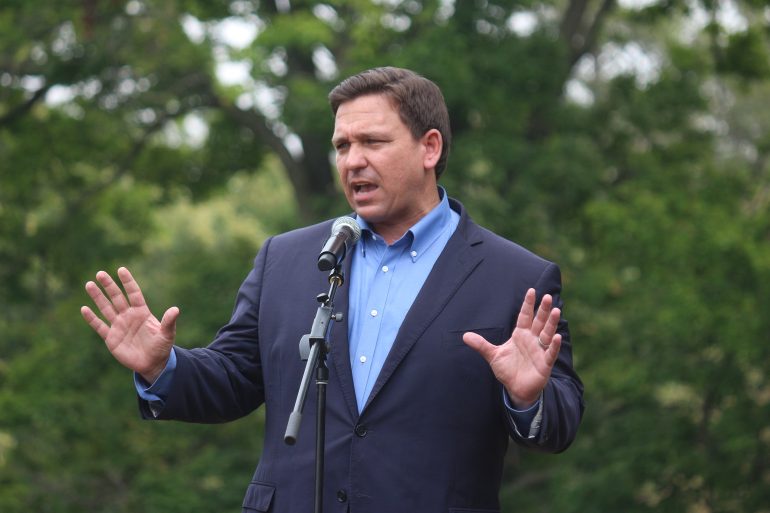 Governor Ron DeSantis (R-FL) dropped the hammer on the Sheriff of  Bexar County Texas Javier Salazar, after Salazar, a Democrat, declared war on him and attempted to order an investigation into the conservative firebrand for transporting 50 illegal immigrants to Martha’s Vineyard.

Salazar joined the shrill chorus of Democrats who have been screeching about DeSantis’s decision to fly two planes loads of illegal immigrants from Texas to the affluent elitist playground of Martha’s Vineyard. The activist Sheriff is now promoting the kidnapping angle espoused by California Governor Gavin Newsom (D-CA) and has launched an inquiry into whether the migrants being were allegedly lured from the Migrant Resource Center under false pretenses and flown to Martha’s Vineyard.

Texas Bexar County Sheriff Javier Salazar announced at a news conference Monday that his office is investigating whether the migrants who were flown to Martha's Vinyard were the victims of a crime, saying they were “lured under false pretenses.” pic.twitter.com/7sfDN8SjX7

The Bexar County Sheriff’s Office has opened an investigation into the migrants that were lured from the Migrant Resource Center, located in Bexar County, TX, and flown to Florida, where they were ultimately left to fend for themselves in Martha’s Vineyard, MA.

DeSantis, however, is having none of it, and has claimed sole responsibility for the two charter planes filled with Venezuelan refugees that he flew from San Antonio to Florida and then to Martha’s Vineyard. According to reports, the illegal immigrants were offered several chances to voluntarily leave. According to officials familiar with the matter, the participants were provided with accommodations, meals, baths, and haircuts for a few days prior to the journey.

DeSantis’s administration denied reports that illegal aliens were given work in Martha’s Vineyard, however.  And went on to claim that the migrants were merely given accurate information on the advantages and services that are customary in liberal sanctuary cities and states.

NEW: The Bexar County, TX Sheriff’s Office has opened an investigation into Florida’s flight of migrants from TX to Martha’s Vineyard, claiming they were “lured”.

Gov. DeSantis’ office is firing back, referencing the 53 migrants who died in a trailer in Bexar County in June. 👇🏻 pic.twitter.com/iJJBOjZxyD

DeSantis’s decision to sent the planes to Martha’s Vineyard also drew the ire of the far-left California Governor Gavin Newsom. Who has now demanded that Attorney General Merrick Garland investigate whether the Florida governor could somehow be charged with kidnapping. Newsom’s apparent outrage is somewhat ironic as he previously launched a program during his tenure as San Francisco mayor that attempted to bus thousands of homeless people out of the state of California, according to Fox News.

[READ MORE: Teen Killed For Being A Republican]