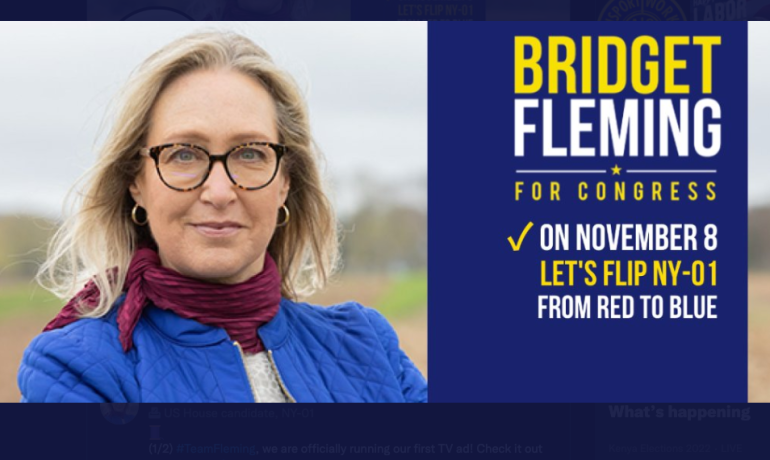 Democrat Congressional Candidate Cited for Failing to Pay Taxes, Despite Raising Them on Citizens

Bridget Fleming is a lawmaker in New York and is running to become a Congresswoman representing the state.

She has voted numerous times to raise taxes but according to The Washington Free Beacon, she doesn’t like to pay them herself.

Fleming was cited by the State of New York for failing to pay her taxes.

In March 2009, New York’s taxation department filed a judgment against Fleming and her husband, Robert Agoglia, for failure to pay $2,426 in taxes, according to the Suffolk County Clerk’s Office. County records show the couple did not resolve the tax debt until late June, more than three months after the judgment was imposed.

Fleming is one of several Democratic candidates for the House who have pushed for tax hikes and tougher tax enforcement while having a history of delinquency, which could prove a liability in the competitive Long Island district she’s running to flip.

It is unclear why Fleming failed to pay her taxes. According to the taxation department, taxpayers are given prior warning regarding their unpaid debt before a judgment is issued, after which the state is entitled to seize debtors’ property and garnish wages. Fleming’s campaign did not return a request for comment.

The year after she faced the tax judgment, Fleming won election to the Southampton town council and soon lent support to measures that hiked the tax burden on her constituents.

Fleming, who faces Republican Nick LaLota in November, in a highly competitive district, did not let her aversion to paying taxes stop her from raising them on her constituents.

She voted to raise takes in 2011, 2016, 2018, and 2019. And Fleming has also endorsed the Democrat’s inflation reduction act which gives the IRS $80 billion to hire new agents and increase audits.