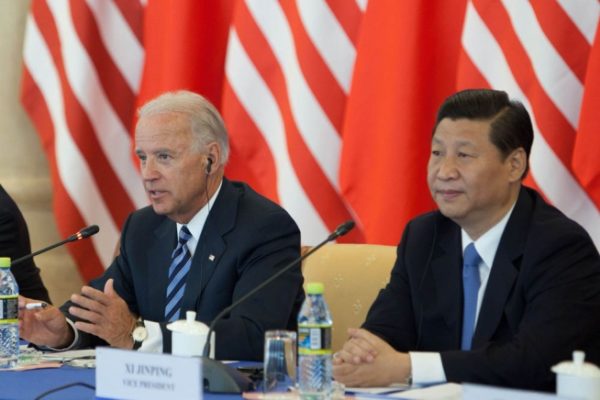 Vice President Joe Biden sits next to Chinese Vice President Xi a during the roundtable with US and Chinese business leaders at the Beijing Hotel in Beijing, China, August 19, 2011. Wikimedia Commons
Nick Landry·
NewsWorld
·8 months ago··0

US Boosts Ties With Taiwan as Tensions Grow With China

China is enemy number one and it appears the Biden administration recognizes that.

Despite the many failings of President Biden and his staff the United States is making moves to strengthen ties with Taiwan as tensions grow with China, The Wall Street Journal reports.

The U.S. Trade Representative’s office on Wednesday unveiled a new pact with Taipei to promote bilateral trade in areas such as digital trade, clean energy and labor rights. The two partners will also collaborate to address nonmarket practices and policies, including those conducted by state-owned enterprises, an issue representing Washington’s leading complaint about China’s trade policy.

Separately, Commerce Secretary Gina Raimondo is launching a separate dialogue with Taiwan to address technology trade and investments, citing the importance of Taiwan as a leading supplier of advanced semiconductors. Export controls of sensitive technologies will also be addressed by this initiative, senior administration officials said.

“Taiwan is an incredibly important partner to us, especially as it relates to semiconductors,” Ms. Raimondo told reporters Tuesday. “We look forward to continuing to deepen our economic ties with Taiwan, and we are in active conversations with Taiwan.”

This however follows a snub of the Taiwanese. They were not invited to join 12 other Asia-Pacific nations and the United States in an economic cooperation pact out of concerns it would anger the Chinese.

The new pact directly with the Taiwanese seemingly is meant to show that the US does intend for them to be trading partners, just not to the level of the other 12.

The report showed that Liu Pengyu, spokesman for the Chinese Embassy in Washington, said: “China firmly opposes all forms of official interactions in any name or form between Taiwan and countries having diplomatic ties with China” Mr. Liu urged the U.S. to “immediately stop elevating relations with Taiwan in essence, stop any form of official interaction and contact with Taiwan and stop sending any wrong signal to ‘Taiwan independence’ forces.”