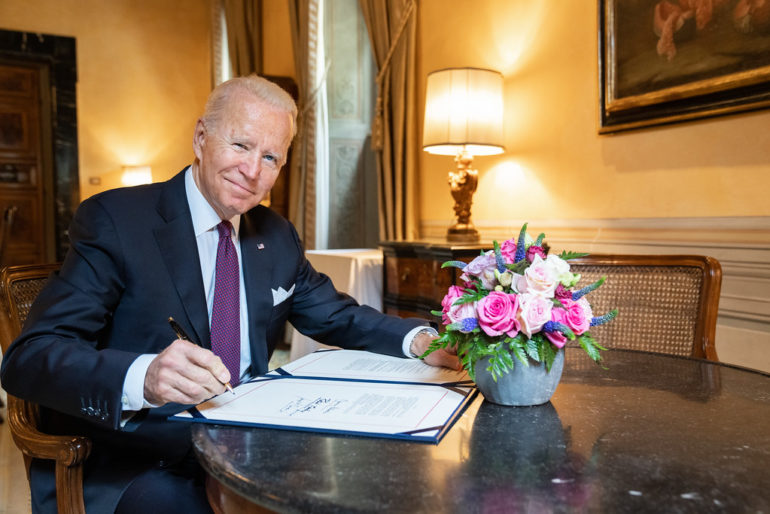 Joe Biden has done it again. The President of the United States spent his time in Europe promising US troops they will see battle in Ukraine, lobbying for regime change in Russia, and promising to launch attacks on Russia if they use weapons of mass destruction.

The tensions are now escalated despite multiple attempt by Biden’s handlers – staffers – to walk back the President’s comments and perform damage control.

The President said on Saturday that Putin “cannot remain in power” effectively advocating for regime change in Russia.

New Conservative Post reported more in depth on the issue:

President Biden’s tour of Europe to rally our allies against the Russian invasion of Ukraine has seen the elderly president “misspeak” three times in ways that could only cause tensions to escalate. Multiple times on his trip, officials from the White House have had to clarify the president’s remarks.

The first time he said that NATO would respond “in kind” if Putin deployed weapons of mass destruction in Ukraine. Biden’s National Security Advisor Jake Sullivan White House said the United States holds “no intention” to use chemical weapons against Russia when asked about these remarks. Sullivan said that Biden actually meant “we’ll respond accordingly” and that Russia would pay a “severe price.” He continued: “We will collect the form and nature of our response based on the nature of the action Russia takes. And we’ll do so in coordination with our allies.”

Later in his trip, President Biden told the 82nd Airborne, currently stationed in Poland, that “You’re going to see when you’re there. And you — some — some of you have been there. You’re going to see — you’re going to see women, young people standing — standing the middle of — in front of a damn tank, just saying, “I’m not leaving. I’m holding my ground.” They’re incredible. But they take a lot of inspiration from us.”

When pressed on whether this meant that the president had changed his mind about sending troops into Ukraine by Fox News, the White House was forced to explain that the American military would not be deployed to Ukraine amid Russia’s multifront war on the country. A White House spokesman said, “The president has been clear we are not sending U.S. troops to Ukraine and there is no change in that position.”

Biden promised Ukraine that the United States stands with them, while trying to unify American allies and NATO members to come together to stand up authoritarianism. The stand that they take remains to be seen.