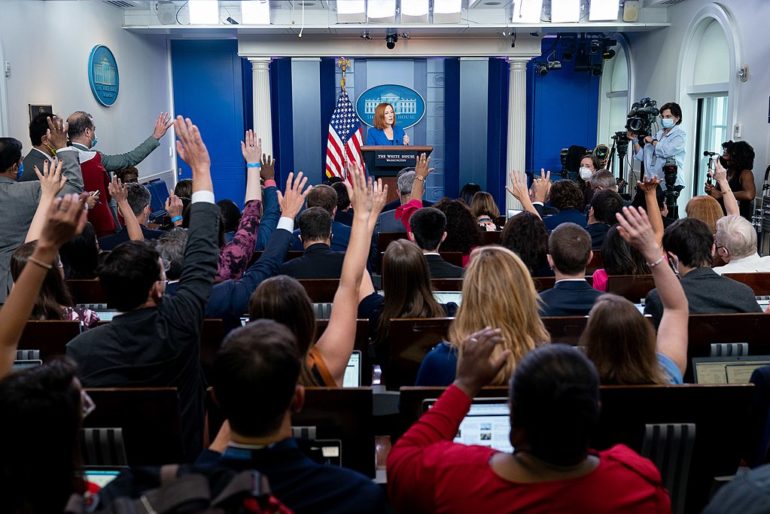 Doocy asked Psaki if President Biden knows that “after a year in office people do not feel safe in this country?”

Psaki replied that it’s been a surge over the last two years. However, Doocy did not let her off the hook.

“So what are you attributing the rise in crime to then?,” Doocy retorted.

Psaki first blamed gun violence as a “huge reason”, but what she said after that will not sit well with most Americans:

“Underfunding of some police departments and their need for additional resources […] that’s something we know we need to take action on,” said Psaki.

The admission that underfunded police departments is a contributor to the rise in crime rates is not a shock to most Americans, but it will certainly cause a larger rift amongst the broader Democratic Party.

During the pandemic, high-profile Democrats led by the likes of Congresswoman Alexandria Ocasio-Cortez paraded around Congress and on the television circuit touting the buzzy slogan “Defund the Police”. On top of that, Congresswoman Ihlan Omar went to the extreme to propose Minneapolis should “disband” it’s police department.

The “Defund the Police” movement gained momentum and led to several cuts to police budgets around the country.

For instance, in 2020 then-New York City Mayor Bill de Blasio struck a tentative deal with City Council to cut the police budget by a whopping $1 billion.

The attack on police budgets didn’t end there.

Los Angeles approved a study to find ways to cut the police budget by $100 million and cities including Portland, Baltimore, Washington, DC and Seattle all proposed or approved plans to make cut their own law enforcement budgets over the last two years.

The certainly appears to be a correaltion between the crime rate and police budgets as El American suggests:

In 2020 homicides in Portland were 55, the most murders in the city in 26 years. Homicides from July 2020, after cuts were made to the Police budget, through February of this year, were up 270.6% over the same period last year. In the first two months of 2021 alone, Portland reported 17 murders.

To make matters worse for the Democrats the polling also suggests they are on the wrong side of the issue. Last year, a USA Today/Ipsos poll showed 7 out of 10 Americans supported an increase in police budgets and 77% wanted to see more police patrolling the streets.

This will most certainly be a hot topic which plays out during the midterm elections.