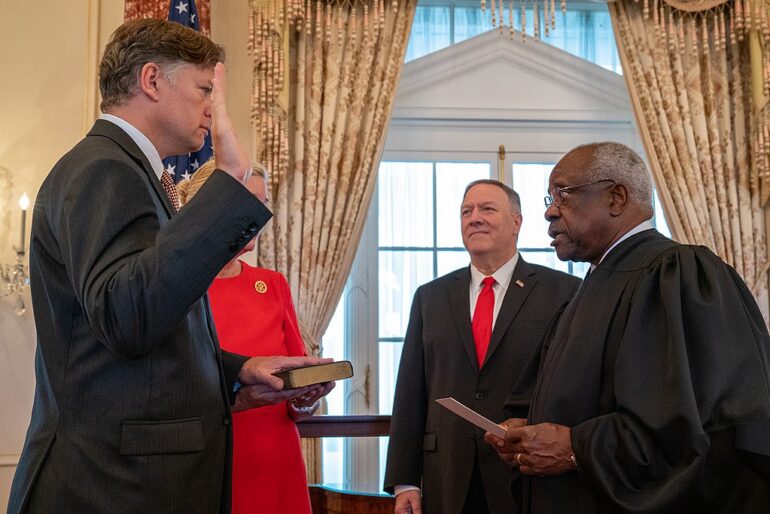 U.S. Secretary of State Michael R. Pompeo Participates in the Swearing in of U.S. Ambassador to Mexico Christopher Landau on September 13, 2019 at the Department of State [Photo Credit: U.S. Department of State from United States, Public domain, via Wikimedia Commons]
Nick Landry·
NewsPolitics
·6 months ago··1 Comment·0

Justice Thomas will no longer teach at the George Washington University Law School his co-professor has revealed.

The decision by Thomas comes after students protested him being a professor at the university, The Daily Caller reports.

Fox News reported that Maggs email said, “Unfortunately, I am writing with some sad news: Justice Thomas has informed me that he is unavailable to co-teach the seminar this fall…I know that this is disappointing… I am very sorry… The seminar has not been canceled but I will now be the sole instructor. For those of you still interested in taking the course, I assure you that we will make the best of the new situation.”

Students had petitioned to remove Thomas from his role at the university because him being a part of overturning Roe v Wade was “unacceptable.”

They went further stating that his decisions “actively” endanger “the lives of the students on campus.”

The radical left has recently targeting Thomas as well. A petition to impeach him has over a million signers.

However, these groups are taking it even further in their targeting of the justices. They are paying people for tips when they see them in public so they can actively be harassed in an attempt to intimidate them into ruling in their favor.

It is against federal law to do this but the justice department has yet to prosecute anyone.