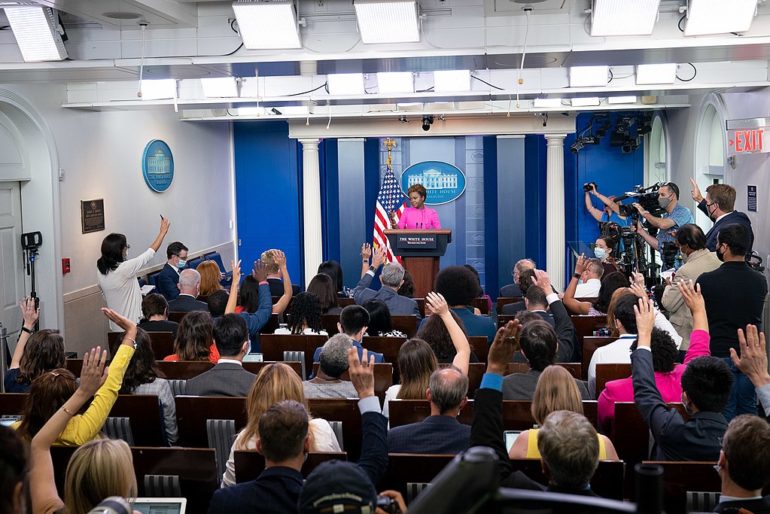 The Biden administration does a good job at pushing half-truths, mistruths, and false information.

The Daily Caller reports that during a recent exchange on gun violence Doocy stumped Pierre over claims that the Biden administration knows how to stop gun violence, and the assault on law abiding American’s freedoms is the way to do it.

Pierre insisted that Biden has beaten the gun lobby in the past and that he knows how to get things done in Congress.

Doocy responded by asking why Biden didn’t invite lawmakers to the White House to teach them how to beat the gun lobby to which Pierre had no substantive response.

Doocy then asked about a potential law that would prevent certain people from purchasing or obtaining a gun. She listed red flag laws and the president’s calls for Congress to “take action.”

“Well, they’re having negotiations right now to talk through what the options are. I mentioned the red flag laws. If enacted, we have seen across the country that in different states, it has been helpful. We are going to give them some space to see what they come up with. The most important thing here is that the president wants Congress to take action and to act.”

Doocy pushed back by pointing to 47 victims shot in Chicago over Memorial Day weekend, despite having some of the strictest gun laws in the country.

“Which law would have prevented that?” he asked. “Do we think all of these people in Chicago that are shooting each other are legally buying their guns?”

Jean-Pierre mentioned the red flag laws effectively preventing shootings in Florida, California, Connecticut and Indiana, then said the administration’s push for expanded background checks will prevent firearms from getting “into the hands of criminals.”

Doocy finished with asking if Biden’s focus on gun control was to distract from the baby formula shortage and inflation.

“People have died in the past couple of weeks in particular. This is not about politics, this is not about partisan politics here, this is something that he has worked on since he was a senator. This is very important and real for the president and for the grieving families that he has met with, sadly in the last two weeks. So this is an opportunity to call for action, to get Congress to move. It is disheartening to hear that this could potentially be used as a political tool and that’s not what this is.”