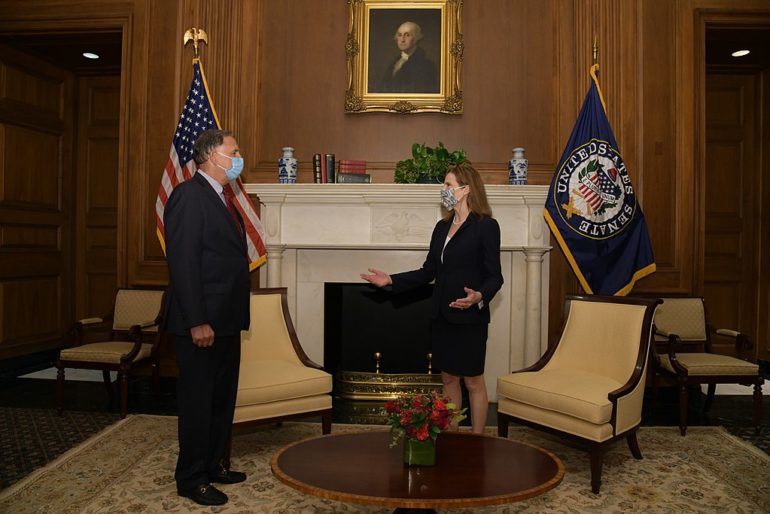 While her legal & academic resume were already well known, the hearings gave the country an opportunity to see Judge Amy Coney Barrett’s exceptional intellect & calm demeanor on display. I appreciated visiting with her & look forward to casting my vote to confirm her. [Photo Credit: Office of Senator John Boozman, Public domain, via Wikimedia Commons]
Nick Landry·
NewsPolitics
·9 months ago··2

Reecently a report came our of a recording of Boozman claiming the results of the 2020 election were legitimate.

It is reported that Boozman immediately called Trump to smooth things over saying he was grateful for Trump’s endorsement and always supported him.

Trump was apparently upset, and it caused Boozman to scramble as he faces a 33-year-old NFL player and former Arkansas Razorbacks star Jake Bequette.

He is backed by billionaire Republican megadonor Richard Uihlein.

Uihlein’s involvement illustrates how a single free-spending billionaire can alter the contours of an election and put a once-safe incumbent on edge. According to public disclosures, Uihlein’s $1 million gift to a pro-Bequette super PAC accounts for nearly all of the group’s money. The super PAC, Arkansas Patriots Fund, has flooded the TV airwaves with ads labeling Boozman as President Joe Biden’s “favorite Republican,” a “liberal” and “weak.” The commercials contrast him with Bequette, who is promoted as a hard-charging Super Bowl champion — he was on the Patriots’ practice squad when they won it all in the 2014 season — and veteran Army Ranger who is “pro-gun, pro-wall, pro-life.”

It’s unclear how serious a threat the 71-year-old Boozman faces, but the primary has become one of the best-funded and most serious efforts to dethrone an incumbent senator this year. Roby Brock, the editor-in-chief of Talk Business & Politics, a well-read website that covers the Arkansas political scene, said Uihlein’s money had lifted Bequette but that the senator was “holding steady.”

Brock cautioned, though, that if Boozman’s primary opponents hold him to under 50 percent of the vote in the May 24 primary, forcing him into a one-on-one June runoff against Bequette, “all bets are off.”

Uihlein, an Illinois-based shipping and supply company executive whose family founded Schlitz beer, has a long history of backing insurgents. In 2014, he was one of the biggest donors to Senate Conservatives Action, a tea party-aligned super PAC that spent in primaries against Senate GOP leader Mitch McConnell and then-Sens. Thad Cochran (R-Miss.) and Pat Roberts (R-Kan.), all of whom prevailed. In 2018, Uihlein plowed millions of dollars behind Jeanne Ives, a conservative challenger who ran — and narrowly lost — against the sitting GOP governor of Illinois, Bruce Rauner.

Both Bequette and Uihelin are both allies of David McIntosh a former GOP Representative from Indiana, and the leader of the Club for Growth. McIntosh is a powerful Republican figure and could likely have introduced the two.