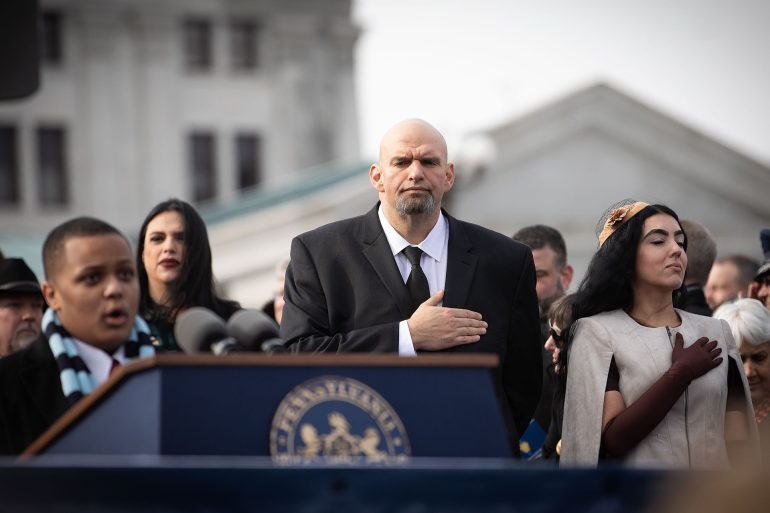 According to a new report from the Washington Free Beacon it appears that current Pennsylvania Lt. Governor and Democrat Senate nominee John Fetterman formerly backed extreme pro-crime policies while seeking the endorsement of a radical anti-police group in 2018.

In 2018, Senate candidate John Fetterman claimed he opposed  “tough on crime” tactics and was extremely thrilled about radical policing reforms recommended by a Philadelphia district attorney backed by George Soros.

In a questionnaire for Reclaim Philadelphia, a far left activist group that alleges Philadelphia’s police budget is “stolen” Fetterman spelled out his thoughts on a “progressive agenda.” Fetterman, who was running for lieutenant governor at the time, told the group that he would use the post “as a bully pulpit” to promote its radical ideas on police and sentencing “reform.”

“There is a real opportunity to build a statewide platform that elevates and exposes the damage created by the school-to-prison pipeline, the prison industrial complex, and ‘tough on crime’ policies like ‘Stop and Frisk’ and cash bail,” Fetterman declared.

Fetterman’s previous support for progressive criminal justice reform may work against him if crime rates rise across the country. Republicans have emphasized Fetterman’s opinions on the matter, as well as his time on the Board of Pardons, in a series of stinging advertisements intended at painting the Democrat as soft on crime.

Krasner is now facing impeachment for alleged “dereliction of duty” as crime in Philadelphia has continued to soar out of control in the liberal city.

While Fetterman has officially claimed he doesn’t support initiatives to ‘Defund the Police’ nevertheless he has repeatedly sought the support of a number of individuals associated with cause.

Reclaim Philadelphia, for instance, asked its supporters in 2020 to help pressure the mayor into cutting 120 million dollars in funding for the city’s police department.

And although Fetterman has not been officially endorsed by the organization, Reclaim Philadelphia does hold regular canvassing events in support of his candidacy.

Fetterman has also previously campaigned with three Philadelphia city council members who have supported ‘Defund’ initiatives in the past as well as selecting an appointee for the Pennsylvania Board of Pardons who had previously called to ‘disarm the police’ and had boasted about her friendship with a convicted cop killer.