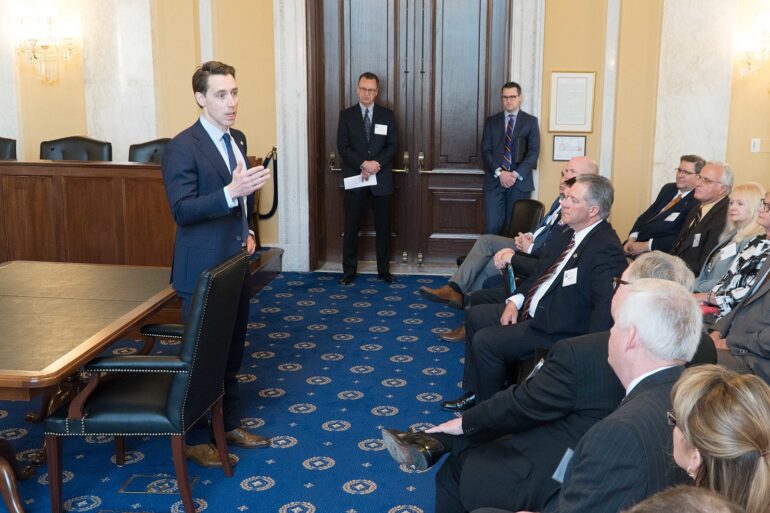 Originally appeared on The Daily Signal.

As the Biden administration scrambles to respond to the Supreme Court’s landmark June 24 decision to overturn Roe v. Wade, the Senate Judiciary Committee held a hearing Tuesday on the legal landscape following the ruling.

The hearing began with a video clip introduced by Sen. Dick Durbin, D-Ill., who called the decision by the high court to overturn Roe “unprecedented.”

The video presentation notably used the word “woman” to describe who would be most affected by the court’s decision. Sens. Amy Klobuchar, D-Minn., and Dianne Feinstein, D-Calif., however, referred to “pregnant people.”

The following are five takeaways from the hearing on “A Post-Roe America: The Legal Consequences of the Dobbs Decision.” The latter is a reference to the case of Dobbs v. Jackson Women’s Health Organization.

1) Hawley Accused of Being ‘Transphobic’

Though the opening video prepared by Senate Democrats seemed to imply abortion is a women’s issue, one witness seemed to strongly disagree.

During a back-and-forth exchange with Sen. Josh Hawley, University of California at Berkeley law professor Khiara Bridges accused the lawmaker of excluding biological men who say they are women when he said that women get pregnant.

“You’ve referred to people with a capacity for pregnancy,” Hawley, R-Mo., said. “Would that be women?”

Cis-woman is a term used to denote biological women who identify as women, while trans-man is a woman who “identifies” as a man. Nonbinary people identify as neither men nor women.

Hawley: “So, this really isn’t a women’s rights issue? So, your view of the core of this [right to an abortion] is what?”

Bridges: “I want to recognize that your line of questioning is transphobic, and it opens up trans people to violence.”

An incredulous Hawley responded by asking if Bridges was seriously implying that he was transphobic simply for stipulating that only women can get pregnant.

“No, I don’t think men can get pregnant,” the Missouri lawmaker said.

Sen. Tom Cotton, R-Ark., focused on the harassment, intimidation, and threats of violence made against Supreme Court justices since the May 2 leak of a draft of the Dobbs ruling and in the weeks since the official ruling was issued.

“Over the last few months, we’ve seen a marked increase in violence and intimidation by pro-abortion groups,” he said. “Left-wing mobs have gathered outside the homes of Supreme Court justices to try to intimidate them and affect their decision in the Dobbs case in blatant violation of federal law, yet the weak and hopelessly partisan Attorney General Merrick Garland refused to enforce that federal law.”

It’s gotten so bad that the Supreme Court marshal has had to go to the governors of Maryland and Virginia and plead with them to protect their Supreme Court justices at their homes.

Pregnancy resource centers are nonprofit organizations that provide free or low-cost support to pregnant mothers through all stages of a pregnancy. Often, the centers will also provide support services and resources after the child is born.

In the aftermath of the decision to overturn Roe, many of these centers have been vandalized or attacked. Centers have had their windows smashed and vulgar pro-abortion phrases spray-painted on their walls, and some radical activists have taken to firebombing the centers with Molotov cocktails.

Cotton noted that pro-life and religious organizations have also been the targets of pro-abortion activist violence.

“It’s not just Supreme Court justices targeted. Pro-abortion groups, including one calling itself Jane’s Revenge, have claimed credit for firebombing a pro-life organization in Madison, Wisconsin, and numerous other firebombings, attacks, and acts of vandalism against pro-life groups in more than a dozen states,” the Arkansas lawmaker said.

The same group even attacked and vandalized the campaign office of a Republican congressman. This [past] weekend, three separate churches in Maryland were attacked—all three vandalized and desecrated, and two were set on fire. Those attacks are currently under investigation but are believed to be related to pro-abortion causes and groups.

Cotton asked each of the witnesses whether they condemned the violence and vandalism by radical pro-choice groups.

The GOP witnesses, Harle and Matzke, agreed that violence was not to be tolerated.  “I do condemn all violence, and I would note that abortion is an act of violence against the most innocent and vulnerable human beings,” Harle said.

The Democratic witnesses—Stratton, the Illinois lieutenant governor; Bridges, the Berkeley law professor; and Dr. Colleen McNicholas, an obstetrician-gynecologist with Southwest Missouri Planned Parenthood—condemned the violence against pro-life centers, but asked that past violence against abortion providers and clinics be condemned as well. The three witnesses also argued that the reversal of Roe v. Wade is inherently “violent” against women.

“I condemn violence, and I would like to note that forced birth is an act of violence as well,” Bridges said.

Some politicians, such as Sen. Elizabeth Warren, D-Mass., have said the government should act against pregnancy resource centers and prevent them from operating.

But according to Matzke, abortion providers like Planned Parenthood will often refer women who want to keep their babies to centers like hers.

When Sen. Marsha Blackburn, R-Tenn., asked her what services pregnancy resource centers provide that Planned Parenthood doesn’t, Matzke said, “Ironically, where we are at in Sacramento, California, Planned Parenthood actually refers patients to us. Once a woman walks in, if they do not choose abortion, they are referred to Alternatives Pregnancy Center to be cared for.”

She added, “The fact that Planned Parenthood sees the value of who we are and what we offer to women is important for everyone here to understand.”

Sen. Mike Lee, R-Utah, used the majority of his allotted time for a statement about the system of government in America and how the Dobbs ruling upholds the Constitution.

“It’s also important that we recognize in response to those who have said that the Dobbs decision was somehow undemocratic, nothing could be further from the truth. In fact, the Dobbs decision was a victory for republican democracy. There really is no way to argue otherwise with any credibility,” he said. “What the court did in Dobbs was to return this question, of whether or in what circumstances abortion will be allowed, back to the people and to their elected lawmakers.”

This is how republican democracy in America works. This is how our republic was always intended and established to function.

Lee directly addressed claims that have been made by pro-abortion activists after the reversal of Roe v. Wade.

“It seems to me that the abortion industry, the left, and those incumbent politicians whose campaigns are funded by the abortion industry have gone to great lengths to scare the American people, convincing them that Dobbs does something that it doesn’t do,” the Utah lawmaker said. “It saddens me that they’re doing all of this for the cause of saying that it’s OK and it’s protected by the Constitution to exterminate, to extinguish an unborn human life.

It makes me wonder whether those making those augments are simply afraid of republican American democracy, simply afraid of the American people, simply afraid that when able to make this decision on their own, freed from the judicial oligarchy that has reigned over this area of the law for the last 49 years, they won’t make the same decision that the radical left would make.

5) Democrats Used to Be More Pro-Life

Lee addressed his Democrat colleagues and reminded several that they once supported the pro-life message.

“The doomsday calls from those on the left are ignoring common sense and ignoring human instinct about protecting the most vulnerable among us. Members of this committee, including some who are now attacking the Dobbs decision, once shared these views,” he said.

Lee then submitted a copy of a letter written by Durbin in 1989, when he was in the House of Representatives, in which he said, “I believe we should end abortion on demand” and “I continue to believe the Supreme Court’s decision in Roe v. Wade should be reversed.”