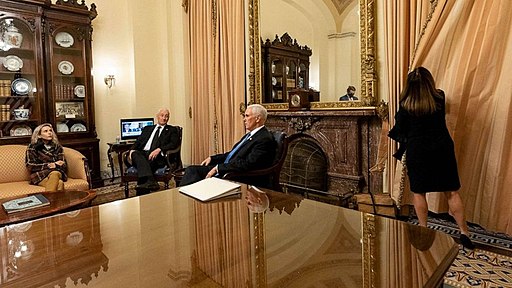 Evactuated to a ceremonial room located off of the Senate floor during the January 6, 2021 United States Capitol attack, Vice President Mike Pence is joined by his daughter Charlotte, brother Greg (a congressman), and wife Karen (the second lady of the United States). Having seen the rioters outside of the capitol through the window, Karen Pence is drawing the curtains out of fear that the rioters could see her family through the window. [Photo Credit: The White House, Public domain, via Wikimedia Commons]
Nick Landry·
NewsPolitics
·8 months ago··0

Pence had the procedure after experiencing chest pain which his office called minor.

The statement said: “Congressman Greg Pence is recovering from a heart procedure over the weekend after experiencing minor chest discomfort. Congressman Pence is expected to make a full recovery from home with his wife Denise and family… The Pence family is grateful to the entire Columbus Regional Hospital team for their exceptional care and professionalism.”

Pence used the opportunity to remind everyone to seek help when you aren’t feeling well, noting cardiac care is time-sensitive.

Greg Pence, the brother of former Vice President Mike Pence, discounted Trump’s pressure campaign waged on his brother to overturn the election results. “Don’t think about it all,” he told me ahead of the hearing focusing on the issue, declining to comment further

Pence has been in the fight to get the Biden administration to reverse course on its energy policies.

[READ NEXT: Oprah: The Next President?]