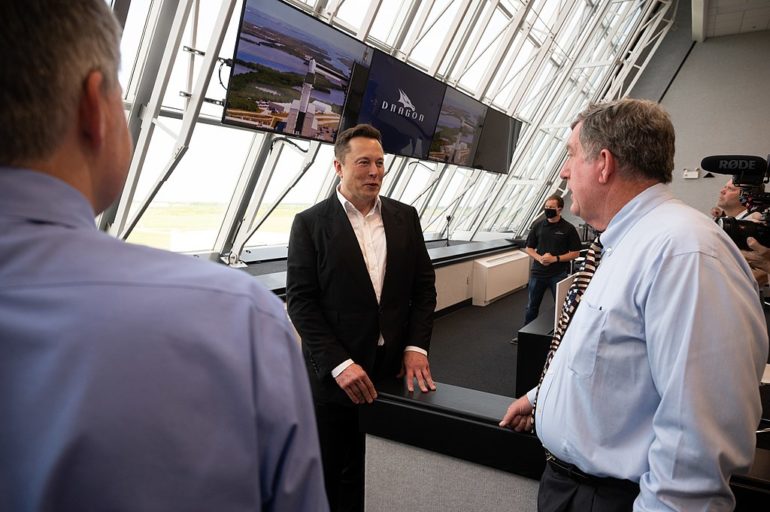 Elon Musk, SpaceX Chief Engineer, speaks with NASA International Space Station Program Manger Kirk Shireman, after the launch of a SpaceX Falcon 9 rocket carrying the company's Crew Dragon spacecraft on the Demo-2 mission with NASA astronauts Douglas Hurley and Robert Behnken onboard, Saturday, May 30, 2020, in firing room four of the Launch Control Center at NASA’s Kennedy Space Center in Florida. NASA’s SpaceX Demo-2 mission is the first launch with astronauts of the SpaceX Crew Dragon spacecraft and Falcon 9 rocket to the International Space Station as part of the agency’s Commercial Crew Program. The test flight serves as an end-to-end demonstration of SpaceX’s crew transportation system. Behnken and Hurley launched at 3:22 p.m. EDT on Saturday, May 30, from Launch Complex 39A at the Kennedy Space Center. A new era of human spaceflight is set to begin as American astronauts once again launch on an American rocket from American soil to low-Earth orbit for the first time since the conclusion of the Space Shuttle Program in 2011. Photo Credit: (NASA/Joel Kowsky)
Nick Landry·
NewsPoliticsWorld
·9 months ago··2

MSNBC Host Now Admits Elections Can Be Swayed by Twitter

Twitter suppressed stories about Hunter Biden reported by the New York Post, one of the nations oldest papers, which very likely could have influenced the election. But now, that it could sway conservative it is an existential crisis.

Melber expressed anxieties that one person can own “all of Twitter,” saying, “If you own all of Twitter or Facebook or what have you, you don’t have to explain yourself.”

“You don’t even have to be transparent,” he continued, before suggesting that the owner of Twitter could sway elections. “You could secretly ban one party’s candidate, or all of its candidates, all of its nominees, or you could just secretly turn down the reach of their stuff and turn up the reach of something else and the rest of us might not even find out about it until after the election.”

“Elon Musk says this is all to help people because he is just a free speech, philosophically clear open minded helper, a world helper, if you will,” he added. “Is that true? Should you take him at his word?”

The level of self-awareness of the legacy media is below measurable range and the Musk Twitter purchase have showed just how engrained with the establishment they are.

[READ NEXT: Trouble in the Biden Admin Revealed]